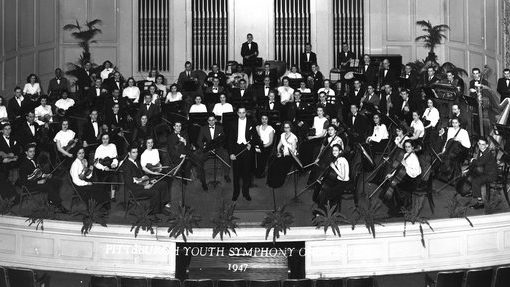 PYSO then…
seen here in 1947 on the stage
of Carnegie Music Hall
in Oakland. 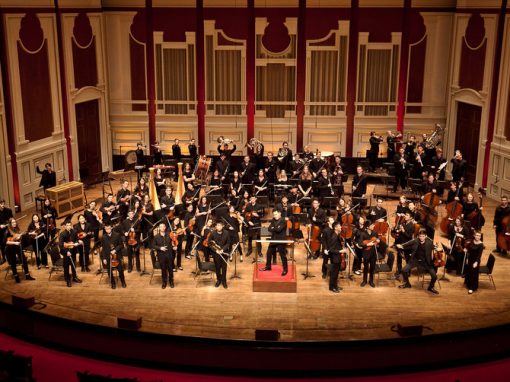 Thank you for visiting the Pittsburgh Youth Symphony Orchestra’s (new) website! We hope you enjoy perusing the pages and seeing our newest feature: In the News, which includes short articles submitted by current PYSO musicians and past members (like you!) It only takes a few minutes to write up a short paragraph of what you’ve been doing these past few years and sending it along with a picture. We want to hear from you!

Have you visited our PYSO Alumni Facebook page?  if not, now is a good time!

If you’re looking for some of your fellow PYSO friends here are a few lists that may help you find them:

We’d like to give a heartfelt thank you to all the Alumni who joined us for our Season Finale concert at Heinz Hall on May 5, 2019. They are pictured below playing side-by-side our current members with Maestro Earl Lee conducting Arturo Marquez’ rhythmically exciting Danzon No. 2.

The alumni who joined us spanned five decades and one came all the way from California! Some of the memories shared are:

Christopher Corbett (Clarinet 2015-2018) Having the opportunity to conduct Beethoven’s Pastoral Symphony in rehearsal and play bass clarinet in An American in Paris and West Side Story.

Evan Hertrick (Bassoon, Saxophone 2003-2005) Our trip to eastern Europe, playing the alto saxophone solo in Pictures of an Exhibition….Loved Prague.

Kathryn Younger Lee (Viola but played Violin while in PYSO 1969-1970) Playing beautiful music with accomplished young musicians inspired me to continue my career as a musician.

Alexis Trbovich (Viola 2011-2013) The European tour was amazing! I also loved the Music for the Spirit Festival; it was amazing to play under the baton of Maestro Honeck.