News from a few more Alumni….

Barbara Khristi (nee Stolp, Violin 1967-73) pictured above playing with her granddaughter who “played for the Los Angeles Opera when she was 12!” shared just a few of her favorite PYSO memories…”I was surrounded by so much talent and was given so many opportunities. I loved our European tour, Florida tour. I loved Marie Maazel.     Burying Rob in the sand of the riviera in Monaco…Lincoln Maazel doing Lincoln Portrait and Peter and the Wolf…Performing in Lausanne with PYSO …(sitting on the bus steps as we traveled the hairpin turns on the way to Monaco since I was sick to my stomach…I was 13 years old when I started at Soldiers and Sailors, auditioned by Marie Maazel and Philip Spurgeon…I learned how bowing is determined for individual sections and across the strings sections, how to read the conductor’s cues and signs, how to perform in the pit for ballet and opera…in short, I became immersed in the world of music…I quickly came to value musical contributions made by fellow musicians and I found a higher level of competition which guided me to work harder…The repertoire expanded my appreciation of a far broader pool of composers and orchestral make up…The professionalism I learned came in handy as I moved on to professional orchestras and ensembles.” Ms Khristi is now a retired musician, but do musicians ever retire?!

Andrew Johnson (Violin 2014-15) studies genetics and economics at Brigham Young University. Andrew was the winner of PYSO’s 2014/15 Conducting Competition and got to conduct Tchaikovsky’s Trepak at

the PYSO Spring concert at Heinz Hall! He reminisces of PYSO’s “amazing music with such talented people.”

Chelsea Medic (Cello 2010-11) lives in Los Angeles and is employed as a Production Coordinator for DreamWorks Animation; she is working on an animated female superhero show released on Netflix this past fall. Chelsea has also started her own business making and selling bar soap on Etsy and at arts festivals around the city. She took a short break from cello for a few years but recently got back into it by joining a community orchestra (…a group of talented musicians whose “repertoire for this upcoming concert is really exciting.”)
She remembers “how excited I was to play in a PYSO concert. I never thought I would be good enough to get into PYSO, so when I got in my senior year of high school, I was overjoyed to play with other students that would go on to be professional musicians. The main thing I remember is just that I loved playing with talented players and that was worth giving up my Saturdays…I was lucky enough to attend the PYSO tour to Italy in 2011 and I had a blast. It was a very surreal experience playing Respighi Pines of Rome both in Rome and in the main square of Florence…PYSO is a truly unique organization to be apart of and it’s something (so far) I have yet to experience again. Though I was only with PYSO for one year, it was truly the best year of my cello “career”. While I knew cello was not going to be my profession, my time with PYSO continued my love for classical music that I know will never leave me.” 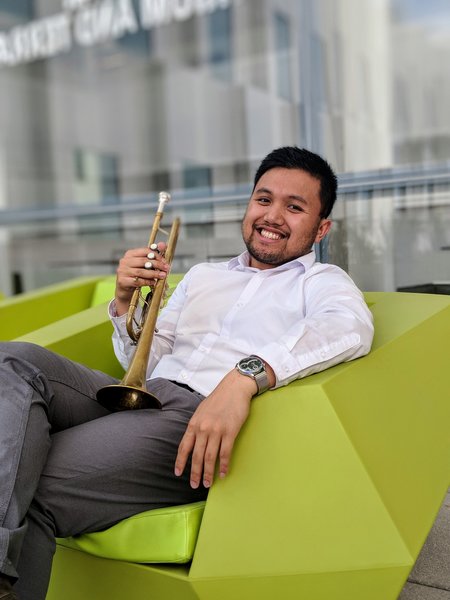 John Kenneth (Kenken) Gorder (Trumpet 2013-16) recently earned his Master of Arts degree in Trumpet Performance from the University of Iowa (May 2018) where he also was the teaching assistant for 2 years conducting ensembles, coaching chamber groups, teaching lessons, and teaching music education courses to undergraduates. Kenken now lives in Austin, TX working as a trumpet instructor for several area schools as well as being a freelance trumpeter.
The first few months of 2019 will be busy for Kenken as he will premier and perform new works for a 13-piece ensemble during the Oh My Ears festival/Black House New Music Workshop in Phoenix, AZ (February) and in late-March he’ll premier and perform new works for trumpet, electronics, and 12-piece ensemble at the Black House Intermedia Workshop in Irvine, CA. In addition to all this he is working on his own instruction book for trumpeters of all ages, composing and arranging music and will be recording an album with Dr. Kenneth Tse (saxophone) and the University of Iowa music faculty!
PYSO “was and still is one of the greatest orchestral experiences I have ever had! The repertoire, coaching, and performances were top-of-the-line. I also remember having some very insightful discussions over lunch with former PYSO music directors, Larry Loh and Francesco Lecce-Chong…Another highlight was having Bill Caballero (PSO Principal Horn) randomly sit in during a rehearsal of Strauss’ ‘Death and Transfiguration’ and blow everyone out of the way with his enormous yet beautiful sound!…PYSO provided me with a high-quality orchestral experience that I could not get anywhere else. I don’t think I would have ever had a chance to play repertoire such as Holst’s ‘The Planets’, Mahler’s ‘Totenfeier’, Strauss’ ‘Death and Transfiguration’, Prokofiev’s Suite for Romeo & Juliet (the list goes on) at such a high caliber! It also has given me insight on the orchestral scene thanks to the stellar PSO coaches and conductors.”

Donald Huang (Horn 2009) is a software engineer at Sigma Computing, Inc., a technology startup in San Francisco innovating in the business intelligence space. Donald recollects PYSO’s “high standards of excellence being pushed by the conductor, staff, and skilled orchestra members. Rehearsing and performing exciting musical pieces…Playing Til Eulenspiegel…Working closely with so many musicians equally committed to creating the most beautiful performance possible opened my eyes to the excellence that could be achieved when like (and unlike) minds come together.”

Steven Leonard  (Clarinet, Violin 1974-77) pictured to the right is currently the Associate Concertmaster of the Traverse Symphony Orchestra in Traverse City, Michigan and the Guest Assistant Concertmaster/Principal Second Violin for the West Michigan Symphony Orchestra in Muskegon, Michigan. Stephen’s take away from PYSO? “Lots of notes! And a great musical experience that taught me so much.” His favorite memories include “the European Tour and trip to Washington DC (1977)…Mrs. Maazel! Allowed me to enjoy music with other musicians of my age and make friends, enduring love of orchestral playing.”

Tim Klatt (Trumpet 1982-87) resides in Wisconsin with his wife, Judy, and their three children, ages 21, 19 and 17. They are soon to be empty-nesters with “two away at college and the last a senior in high school.” Tim (Timothy E. Klatt, MD) is the Medical Director of Patient Safety at Medical College Physicians and Froedtert Hospital as well as the Professor and Head in the Division of General Obstetrics and Gynecology at the Medical College of Wisconsin.
Tim enjoyed “being part of an organization where excellence was expected and achieved…(PYSO’s Music Director) Michael Lancaster’s treatment of us as responsible adults…set the tone of professionalism. When someone or a section did not meet his expectations, he often…said, ‘Have a look at that for next week.’ Rarely was that section an issue again…The talent within the orchestra. The principal trombone, horn, clarinet and concert master were amazing.” 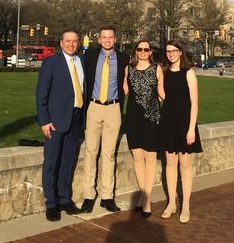 Isaac Mastalski (Viola 2012-14) pictured to the left with his parents and sister is a first-year graduate student at the University of Minnesota, with the goal of obtaining a PhD in chemical engineering. Isaac most remembers “the amazing opportunities PYSO provided from performing in Heinz Hall and throughout the Pittsburgh area to touring in Europe…”PYSO was easily one of the greatest experiences in my life. It was also incredible to be able to perform with such high-level musicians, and to learn from fantastic conductors.”
These are just a few of Isaac’s treasured PYSO memories…”The 2014 tour to Czech Republic, Slovakia, and Austria…Performing with Manfred Honeck in 2012 as part of the “Celebrating the Next Generation” series…The first time I ever got to sit on stage in Heinz Hall…I will never forget how awestruck I felt…Playing Mozart’s Requiem with the Junior Mendelssohn Choir.”
Isaac writes that “PYSO made me a much, much better musician, more so than I ever could’ve predicted…some of the people I met 6 years ago are still some of my best friends…the memories I have of being in PYSO, in particular our Central European tour, are some of my most cherished, and I will always remember them fondly…Being able to say I was a member of (PYSO) will forever be a point of pride for me, and it’s also been a very unique conversation starter and networking opportunity.”