Playing a concert in a town with a stone wall: Avila 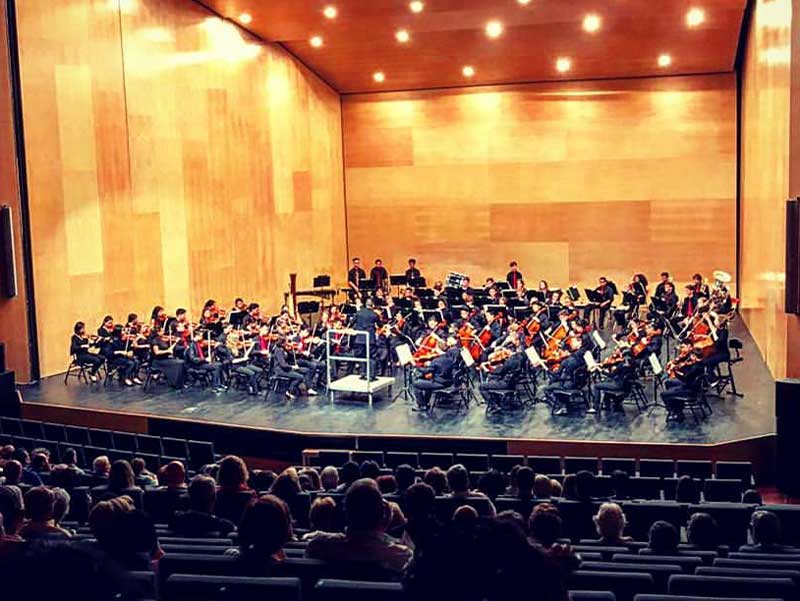 We were up and out the door fairly early this morning, because Avila is about a 90 minute drive from where we were staying in Madrid. Getting away from the city and driving through part of the countryside in Spain was very neat- it certainly isn’t the suburbs of Pittsburgh. There’s no grass. There is, however, lots of reddish brown dirt, funky looking trees, gigantic rocks, and some excellent photo opportunities. Lots of times I heard “Hey, there’s a cow!” Terra cotta roofs and low rise buildings were sprinkled throughout the drive as well, but there is no such thing as what we would call a neighborhood.

When we were finally approaching Avila after some failed attempts to get some sleep on the bus (we did some crosswords and listened to some music), we were greeted by this big wall. I’m talking the kind of medieval wall you expect to see in a movie about 11th century kings, which is when the wall had started to be built. When that thing gets closer and closer to you, you get excited. When we finally stepped foot in the town that is Avila, not surprisingly, it isn’t just the wall that looks medieval. Minus the tourist stuff, it’s like you stepped back in time. Stone streets, rows and rows of small shops and restaurants, old architecture, lines of flags hanging from the tops of the town… it was really cool. What I found early on that was a pretty neat thing to do was to walk the streets and just listen to the conversation I couldn’t understand, and take in what was around me. (There were actually several hotels, so we weren’t the only ones to think it was a good idea to check it out. The place wasn’t crawling with people, but it wasn’t deserted by any stretch.)

Avila doesn’t have a population of 2, but it also doesn’t have a population of 38 million. Because this was a city built way back when, it’s smaller than a modern city, and you’re going to find some things that just stand out to you more than others. I’m mainly talking about the humungous cathedral in the middle of everything. I saw this beautiful structure and made a beeline straight for it. To say that the Avila Cathedral was breathtaking is simply an understatement. This place demanded silence by taking your thoughts and words away, so you were left to appreciate and admire work that began almost a thousand years ago. There are no words to describe the attention to detail, the architecture, the relics, the beauty. The longer I walked, the more I found to explore. I’m simply amazed that a church built so long ago can still stand in such impeccable shape. Everything from the Cardinal’s museum with countless priceless relics, to the outdoor walkways to a courtyard, to the altar itself, to the tombs of the men who called Avila their final resting place… it was fantastic. One of the most striking parts to me was the stone used in many parts of the cathedral. Called “blood stone,” it is white granite veined with red taken from what once was a nearby quarry, unique to Spain. When the sunlight mixed with the glow from the gold all around the place hits this stone, it is truly wonderful. Pictures do it injustice, so words REALLY seem to do it injustice. I chose to walk this alone, even though I was not the only person from our group who decided to go. Companions Kathy and Rebecca Piston, along with Antoinette Tuma also walked around. “You could imagine those who lived hundreds of years ago being there.”

These three lovely ladies happily told me about the other bit of exploring they did in Avila. The Basilica of St. Vincent is closer to the outside of town, and just as beautiful and grand as the Cathedral. Kathy Piston said the following about it:

“Surreal…the Basilica was smaller, but no less grand. It was very quiet, and very peaceful. Despite the intimacy it carries, it is incredibly ornate. Once you know the story of the basilica being built on the spot where 3 children were martyred, it was simply surreal. And to think that all of this happened in the 12th century! After all of this time, people still come to hear and share the story, to marvel in the beauty of this fantastic structure.”

“We went to the top part o the wall. It isn’t too long of a walk, but once you get there, it’s honestly amazing how much you can see. The first view was awesome, but then again, there wasn’t really a bad view. It totally gave you castle vibes. We walked up on the turrets, and that was pretty sick. The whole wall is open to visitors, and it is a pretty decent stretch of mileage. Although, one thing that kind of throws you off is that there’s no safety net or fence blocking off the high parts of it, so if you weren’t being careful, you could totally tumble off. It was still awesome.”

You know, when you first get to Spain, you’re so overwhelmed with the fact you’re in Spain that you sort of forget everything else. There’s so much to look at, to explore, to eat, that you almost get mad when someone says “Hey, be back here in an hour and a half. We have to walk down to the concert hall together to rehearse.” And then it hits you… We’re here to play concerts, that’s right. Rehearsal number one scheduled for the day before had been postponed because of the Delta flight catastrophe, so we rehearsed a few hours in preparation for our performance that night at 8:30. This hall took a little bit to get used to, simply because it was so live and boomy, for lack of a better term. It was a very modern hall that sort of resembled a lecture hall. It was nice to get back to playing with everyone. We ate dinner in the restaurant connected to the hall, and it had a spectacular view of the wall.

One thing that’s different about concerts in America is the way that you walk on the stage in Europe. In America, it is customary to come onto stage at your own pace, warm up, test out what you need to, then begin the performance. In Europe, (of course we did this) everyone walks on stage at once when the concert starts, greeted by a thunderous applause from the audience. A little bit different, but very cool to take part in a different cultural performance act. The audience was very knowledgeable, and loved our entire set – including all 3 encores. I heard from more than one person that they thought this was our best performance to date for the season. As much as we were tired, it was fun getting to play the encores (Torreador from Carmen, Malaguena and La Boda). Being that these were well known pieces by the Spanish people, they became more and more excited with each one that we played. So, simply put, how could you not get into it with that crowd?

We had to get out of the building quickly and onto the buses when the concert was over, with chaperones helping us find our way in the dark to where we needed to go. Chaperone Laurie Cunningham had what may be the best story of the night. Many patrons from the concert came up to her, shaking her hand, giving gratitude to PYSO, shouting “Bravo!” as they walked off into the night. However, one woman came up to her, tears streaming down her face, with the most powerful message of all. Even though her English was broken, we understood her loud and clear. “City of Bridges – no. Pittsburgh… city of music.” Referring to the piece we played by violinist Hannah Ishizaki, this woman really put a smile on our faces as when we heard that story. Safe to say after a long day, we got back to the hotel and slept very well that night.