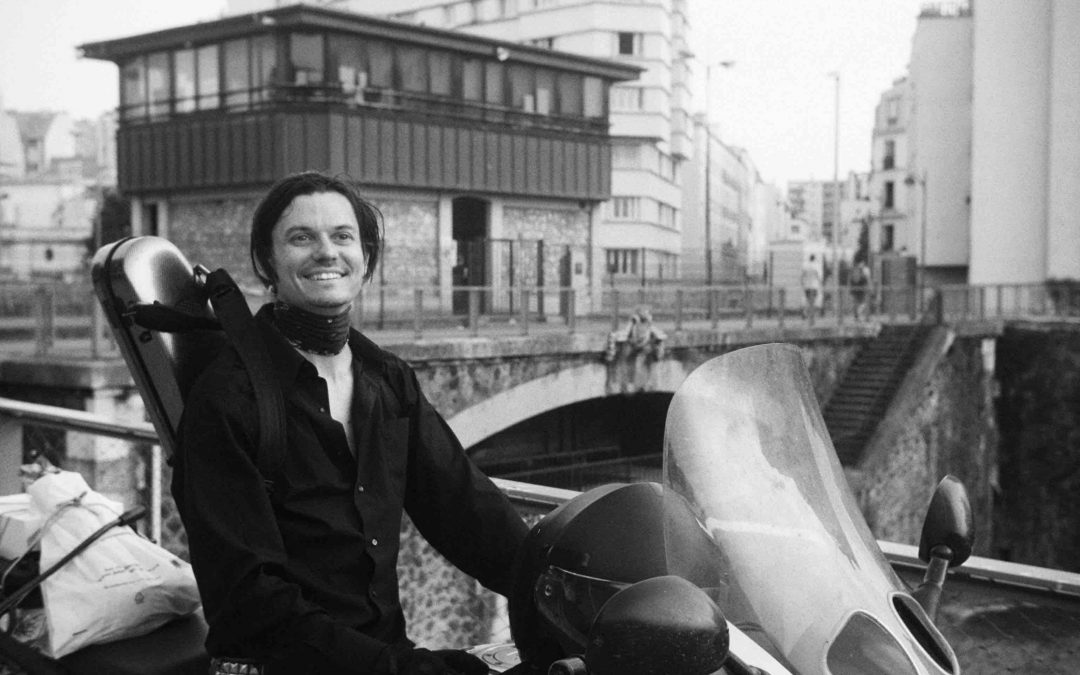 Joseph Molinaro (Violin 1998-2001, pictured above) is the definition of troubadour. In Spring and Summer he plays 40 to 50 concerts of his unique solo violin songs around the world, traveling by motorcycle from city to city. During the school year he teaches music and art at Shady Side Academy Junior School as well as plays classical, jazz, and pop arrangements for weddings and special events. He also organizes concerts of experimental and underground music in Pittsburgh and New York City.
Ed Cumming was our (music) director and he always made rehearsal very engaging and exciting but also mature and reverent. Being on stage at Heinz Hall… set the tone for my whole week.
One of his favorite PYSO memories is when Karina Canellakis played the Sibelius violin concerto with the PYSO. He writes that he was absolutely star-struck. She was so talented, graceful, and passionate. Joe writes that before PYSO “I had scarce experience playing with an orchestra…I wasn’t always happy with my playing but I knew I was getting better. PYSO believed in my progress and gave me the confidence to pursue music as a career.

Laura Sahin (nee Manko/Viola 2001-05) is not only with the Viola and Violin Faculty at Rutgers University-Extension Division, but also Viola and Chamber Music Faculty at Luzerne Music Center, Violist in the Hubbard Quartet and the Santa Fe Pro Musica!She says that through her four years in PYSO there was an overwhelming sense of community and support from fellow members, conductors, coaches, and administration. Her favorite memory is the PYSO Central European tour in the summer of 2005 and she credits PYSO as “one of the main reasons why I am (in part) a professional violist today. I still use lessons that I learned in rehearsals/concerts/tours in my daily playing and teaching.”

Tom Salyers (Trumpet 1996-99) is currently Principal Trumpet in the USAF Band of the Golden West at Travis Air Force Base, California. He is also the Non 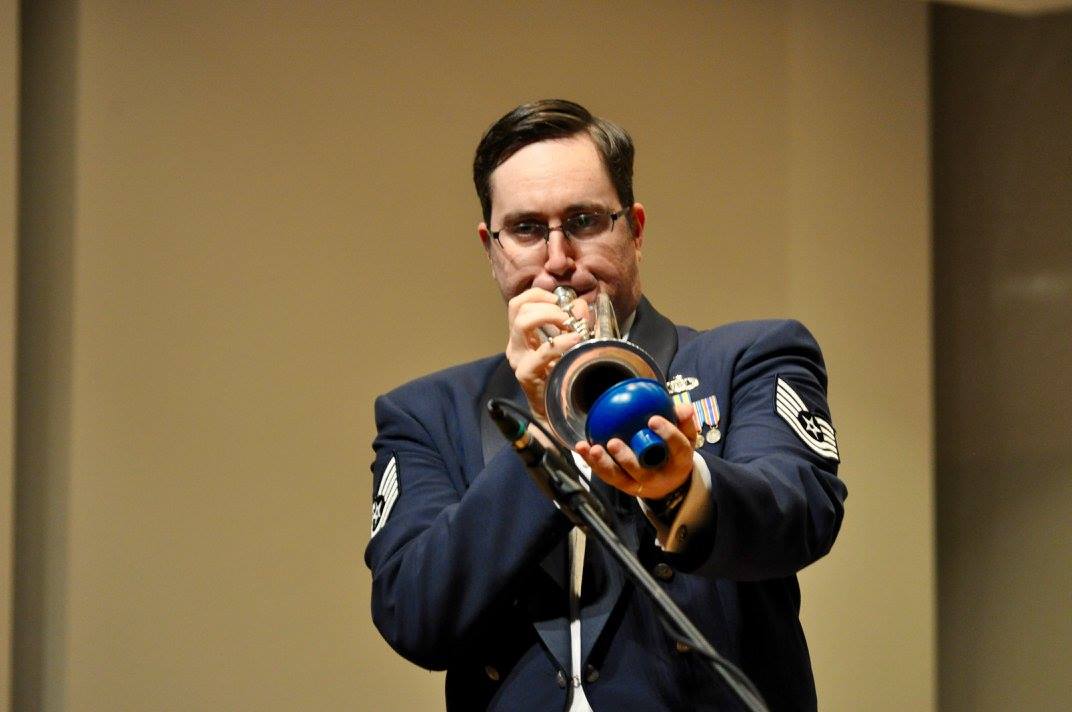 commissioned Officer in Charge (NCOIC) of the Travis Brass Quintet and the NCOIC of their video productions shop. (Here Tom is on the right demonstrating “epic acts of plunger trumpet somewhere in Tokyo…”)
What he remembers most about PYSO is always excited to get up on Sunday morning to go to Heinz Hall and learn more about great music.(Times have changed! PYSO now rehearses on Sunday evenings.) Tom feels fortunate that he was able to study with so many members of the Pittsburgh Symphony and that this was an integral part of the PYSO experience. “Just being able to walk on (the Heinz Hall) stage was inspirational, and made me want to work that much harder so that I could make my living as a performer…I really enjoyed going to Interlochen for the Youth Orchestra Festival and getting to meet Yo Yo Ma…we always played such a wide variety of music. We performed classics like Dvorak’s 8th Symphony, Brahms’ German Requiem, and Strauss’ Tod und Verklarung- but we also played things like Elliott Carter’s Holiday Overture, Michael Torke’s Javelin, and Steven Stuckey’s Funeral Music for Queen Mary…I can’t think of many places where a young musician can learn so much great music for orchestra.
Ed Cumming was the Music Director when Tom was in PYSO and he writes that Maestro Cumming had “a lot of influence on my approach to music, as well as how I run an ensemble now as a professional performer. Most importantly, he was always willing to take a few extra moments to explain things or answer any questions I had.”

n Nanavati (Trumpet 1981-85, pictured to the left) writes that playing in PYSO helped lead him into the music field. From high school, he attended the College Conservatory of Music at the University of Cincinnati and graduated with a Bachelor of Music and pursued music until switching careers. He currently works for Amazon writing curriculum and documents for Amazon Web Services. He fondly remembers his PYSO friends and “how wonderful it was to perform as part of a large ensemble. In the brass section, you could really feel the group vibrate together and operate as a single unit.”

Hunter Montgomery (Viola 2012-13, pictured to the right) is currently majoring in viola performance at Brigham Young University as well as preparing to apply to medical school next year. He writes that he loved “performing and rehearsing in the incredible Heinz Hall!” 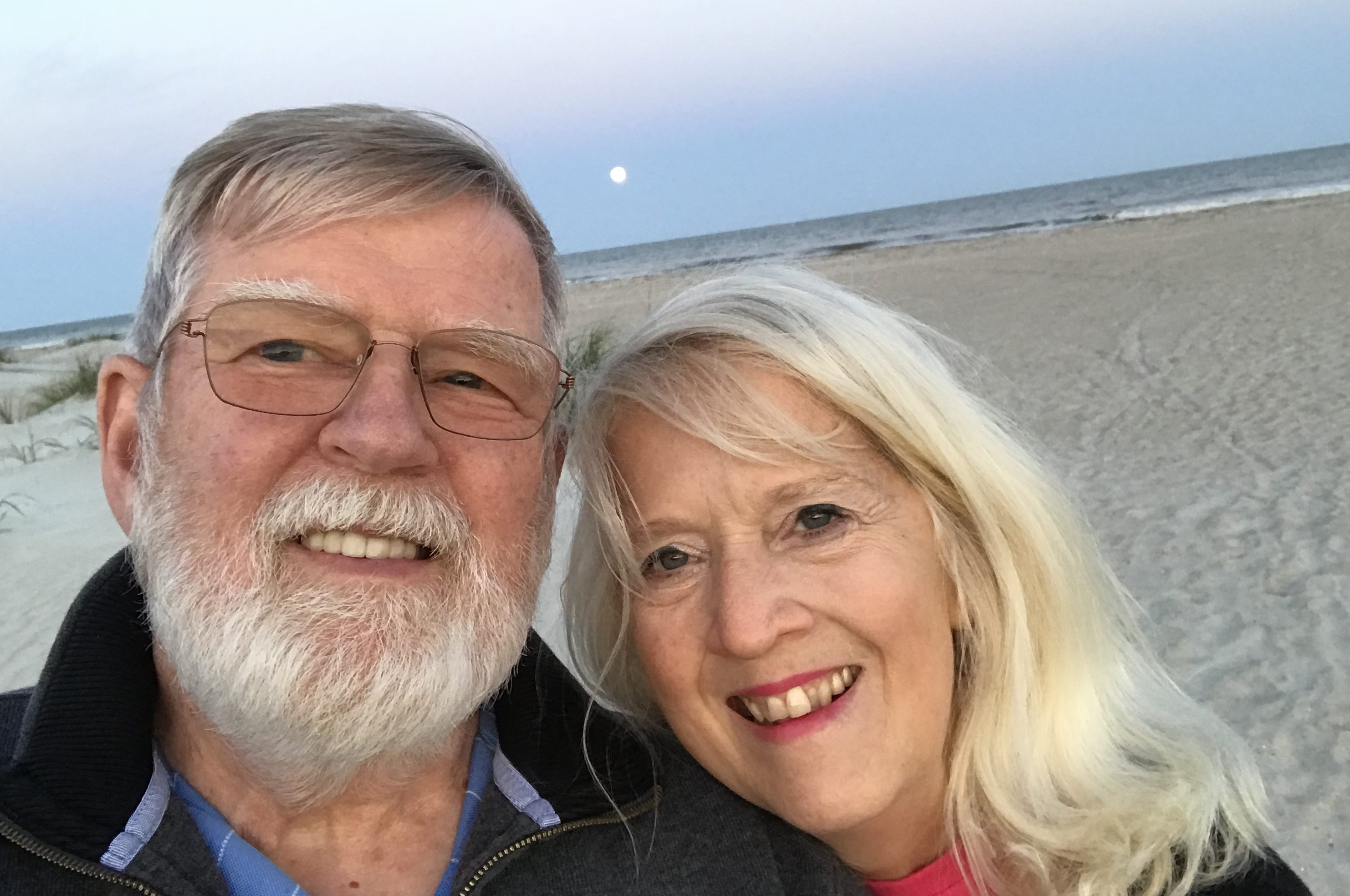 Jack Scandrett (Horn 1960-61) is retired and living near the beach in Hilton Head Island, SC. Jack remembers well the quality of musicianship of PYSO musicians. “Many of the members then were CMU (Carnegie Tech at that time) students. Paul Ross was concertmaster and Karl Kritz was the conductor.” Jack was in PYSO in the pre-Heinz Hall days and the PSO played at the Syria Mosque! “Following the (PYSO) noon rehearsal at Soldiers & Sailors we could go across the street to Syria Mosque to hear the PSO. We could go in the stage door and stand in the back of the balcony…I learned from the older players, many of whom became professionals…(I) had my first introduction to musical style from Karl Kritz and Bernie Goldberg.
Jack is pictured to the left with Lucy Scandrett (nee Clark, who played harp in PYSO from 1972-75). 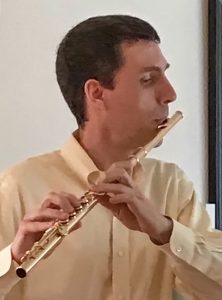 Keith Norbutt (Flute 1989-91, pictured on the right) is an actuary by day, flutist by night, currently living in Chicago. Originally from Pittsburgh, he earned a bachelor of music degree from Duquesne University, studying with Bernard Goldberg and Wendy Webb Kumer. Subsequently, he earned a master’s degree in economics from George Mason University. An avid chamber musician, Keith specializes in arranging pieces for flute ensembles of various sizes, from duos to full flute choirs. He also performs frequently with the Lakeview Orchestra in Chicago, and currently studies with Emma Gerstein. Keith is a fellow of the Society of Actuaries, and a member of the American Academy of Actuaries.

Performing on the Heinz Hall stage, rehearsing with guest conductor Leonard Slatkin and participating in the PYSO Alumni Side-by-Side concert a few years ago are among his favorite memories of PYSO.

Stay tuned Keith and fellow PYSO Alum! PYSO has tentative plans for another Alumni concert this coming May 2019!