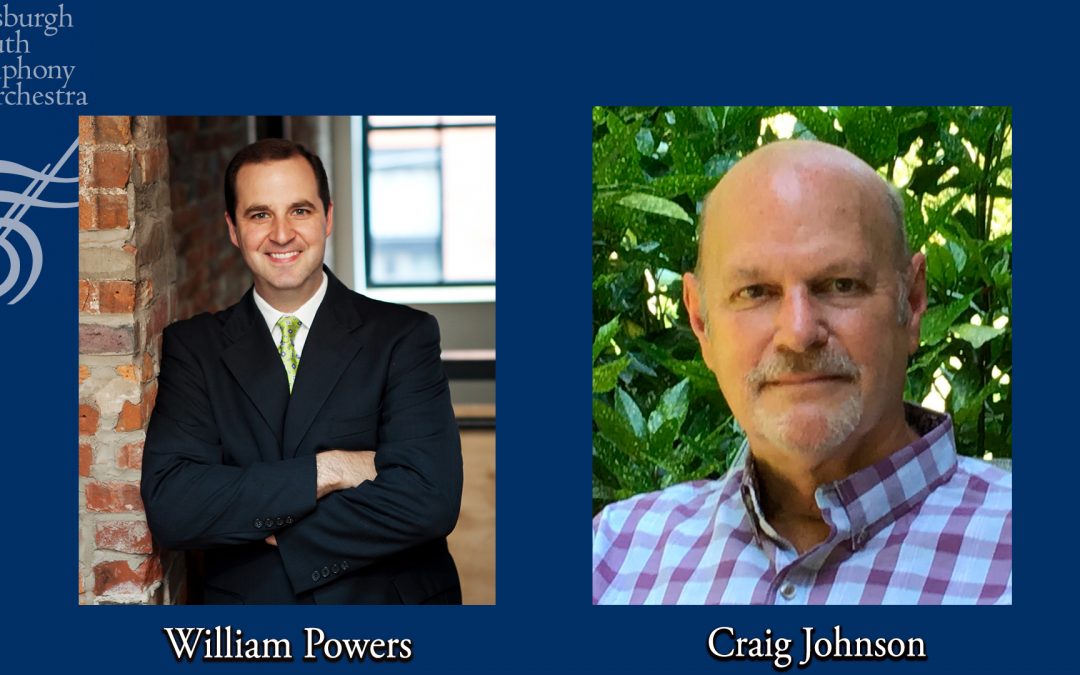 After twenty years as the Executive Director of the Pittsburgh Youth Symphony Orchestra (PYSO), Craig Johnson will retire at the end of this December and William Powers will take the helm, vacating his position as Managing Director of  Pittsburgh Opera.

Mr. Johnson originally announced his retirement plans to the Board of Directors last Spring, and since that time the Search Committee in consultation with NonProfit Talent has worked diligently to find the right person for the position. Successfully whittling down 60 applicants to a finalist of three, the Search Committee has chosen William Powers as the next Executive Director of the Pittsburgh Youth Symphony Orchestra. Mr. Powers officially starts on January 11, 2021.

Mr. Powers comes to PYSO after spending almost fourteen seasons at Pittsburgh Opera. His past experiences include serving as Administrative Director for the Juilliard School’s Department of Vocal Arts and the Juilliard Opera Center and subsequently joining the Metropolitan Opera’s Artistic Department as Associate Administrator in the Lindemann Young Artist Development Program. He has been the General Director of the Berkshire Opera Company and held posts of Production Manager at the Music Academy of the West as well as Administrator of the Aspen Opera Theater Center. He has adjudicated auditions for the Metropolitan Opera National Council and has served on the Board of Directors of OPERA America. Mr. Powers holds a Bachelor’s Degree in Music from Hamilton College and an MBA in Finance from Fordham University Graduate School of Business Administration. He is also an alumnus of the Juilliard School’s Professional Intern Program.

Mr. Powers said he is delighted to join this wonderful organization. He is excited to jump in and eager to get to work in spite of the strange times that all arts organizations find themselves. He also expressed admiration for Mr. Johnson’s 20-year commitment to PYSO and is in awe of all the amazing achievements that Mr. Johnson accomplished during his tenure. Mr. Powers expressed the hope that he can honor Mr. Johnson’s legacy.

Mr. Johnson leaves quite the legacy as well as a strong tradition of long-term leaders. During PYSO’s 75 years in existence, Mr. Johnson is only its third Executive Director having been selected as PYSO’s Managing Director back in 2000. Under his tutelage PYSO started a three-year international tour cycle in 2005 with concert tours of Hungary, Austria, Czech Republic, and Germany (2005); China (2008); Italy (2011); Austria, Slovakia, and Czech Republic (2014); and Spain (2017). He also took the orchestra to Sarasota, Florida in 2002 for the American Symphony Orchestra League’s National Youth Orchestra Festival as well as a concert tour of Washington, D.C. in 2006.

Mr. Johnson was to lead PYSO on their sixth international tour in June of 2020 to Finland, Sweden, Estonia and Latvia, however the tour had to be cancelled due to the pandemic. Mr. Johnson also had to postpone celebration of PYSO’s 75th Birthday, which was originally slated for this past November.

Despite these roadblocks, Mr. Johnson, the PYSO Administrative and Artistic Staff were able to plan a virtual Fall program which culminated in the production of the “Play It Forward” video, a concert video that debuted on youtube.com

on December 13th. Unbeknownst to Mr. Johnson the staff and orchestra were able to insert a salute to Mr. Johnson’s 20 years of service to PYSO with the students playing a rendition of Elgar’s Pomp & Circumstance!

As a parting gift to Mr. Johnson, the PYSO Board has established the Craig W. Johnson Tour Scholarship Fund in his name having raised (to date) $12,500. Melanie LaSota, Board President, explained, “Mr. Johnson has been a big part of the PYSO’s international tours and it is only fitting that a Fund in his name be established so that he lives on within the PYSO organization.”